Born in Taranto on 1967, Mauro Campobasso (guitarist, composer, arranger and teacher) moved to Bologna from more than twenty years.
He graduated in Musicology at DAMS of Bologna and in Jazz Guitar at Superior Biennium of Rovigo Conservatory. Mauro studied and followed master classes with Enrico Rava, Joe Diorio, Christian Escoudè, Pat Metheny, Jim Kelly, John Damian, Tomaso Lama, Domenico Caliri, Augusto Mancinelli, Sandro Gibellini, Marco Tamburini, Alfredo Impullitti, Bruno Tommaso  and others.
Over the years, he has played and worked with extraordinary Italian and International musicians like Pierre Favre, Paolo Fresu, Gianluigi Trovesi, Francoise Hardy, Tino Tracanna, Javier Girotto, Michele Rabbia, Marco Tamburini, Mauro Manzoni, Roberto Ottaviano, Marta Raviglia, Achille Succi, Stefano Senni, Francesco Cusa, Walter Paoli, Cristiano Calcagnile, Gaetano Partipilo, Daniele Scannapieco, Luca Bulgarelli, Maurizio Giammarco, Ellade Bandini, Marco Sabiu, Perry Blake, Cecilia Finotti, Mirko Signorile and Fabrizio Bosso.
From 2000 he worked extensively as a soloist with his original projects as leader, arranger and artistic producer.
During his career Mauro recorded for Emi/Virgin, Universal Music, Parco della Musica Records, Soul Note/Black Saint, DDQ, Dodicilune, Koinè, Splasc(h), Philology labels, and he performed as a leader at the most important Italian and European festivals including Clusone Jazz, Roma Jazz Festival, Pescara Jazz, Metastasio Jazz Festival, Lugano Estate Festival, Tirana Jazz Festival, Ravenna Jazz Festival, Valenza Jazz, Garda Jazz Festival, Piacenza Jazz, Udine Jazz, Trentino Jazz and many more. Currently he has a close engagement and partnership with saxophonist Mauro Manzoni, with which he produced three original projects dedicated to music and movies.
Since 2005 they have embarked in the project "Chaplin in jazz", a trip through movie and music relation; followed by two other multi-media project "Ears Wide Shut" (2008) and "Vertigo" (2010), respectively dedicated to Kubrick and Hitchcock.  On February 2015 started the new project dedicated to the director David Lynch, "Out To Lynch," with Marta Raviglia, Walter Paoli and Stefano Senni. Also under the aegis of the company Theatre of Pescara.
As guitarist Mauro is also working on a solo album and on a new project in trio, The Muse and The Spirit.
He recently started a collaboration with the Sicilian director Salvo Cuccia for the realization of music for "Il soldato innamorato" documentary for RAI Italian television, as composer and performer.
From some years, joined to his concert activity he is doing also an intensive didactic activity, teaching in some of the most prestigious Italian Conservatories: currently has a chair of Jazz Guitar at the Conservatory Umberto Giordano of Foggia and professor in agreement at the Conservatory Morlacchi of Perugia; he has also taught at the Conservatory Nicola Sala of Benevento, Canepa Conservatory of Sassari, Piccinni Conservatory of Bari and at th Institute Sup. of Musical Studies of Livorno.
"I had an extraordinary imprinting with the Multiamp by DV Mark. I was immediately impressed by the exceptional sound quality and by the awesome response to my touch: a sound reproduction is absolutely real, without any misperception or latency."-says Mauro- "I really believe that for me-and for all those who will use it- the Multiamp is an extraordinary tool for sound research, it allows either to evolve the creative horizons through the manipulation of sounds (so many!) and to play with the visceral feeling of traditional tones, and to customize your sound at its best! Versatility, portability and personality: from now I can have them always with me! " 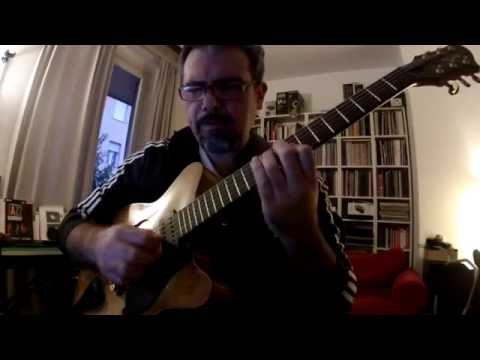