DV Mark top-artist and guitar hero Greg Howe has strictly partnered with Marco De Virgiliis and DV Mark team to tune the DV LITTLE GH 250 to suit amazing clean and creamy distortion tones from its two channels  with effective separate controls.
The DV LITTLE GH 250 head was created following the extraordinary success of the DV MICRO 50 —with the DV Micro and DV Little heads we were the first to introduce such a kind of guitar products design, that marked a new standard for ultra-portable and great sounding amps— offering to guitarists a plenty of power and serious headroom.
With its 250W power amp, the DV LITTLE GH 250 is a perfect choice also for big-stages applications and for louder bands, still in an ultra-compact package.
This amp also features an onboard reverb and a convenient FX loop to best interface with external effects.

MPT - MARK PROPRIETARY TECHNOLOGY
At DV Mark, Marco De Virgiliis invested a lot of resouces in R&D to develope a proprietary power amp technology, designed to respect and glorify the tone of your instrument.

NOTE:
This DV Mark head is manufactured to be sold and used in the country of purchase, and it is factory preset to that country’s voltage.
Due to homologation issues, the voltage may not be changed.
Rack ears do not come included with this head.
Product specifications are subject to change without notice.

We wanted to let you all know we planned a Live Streaming event on Sunday, June 7th at 9:00 pm Italian time. This event will be the very first “My 20 Minutes with” where Marco De Virgiliis will talk to his top Artists.

DV Mark top artist Greg Howe was discovered in 1988 by guitarists talent scout Mike Varney and since then he’s been regarded as one of the most influential guitar players ever!

USA's Premier Guitar has checked out the MARAGOLD head... and had plenty of good things to say! 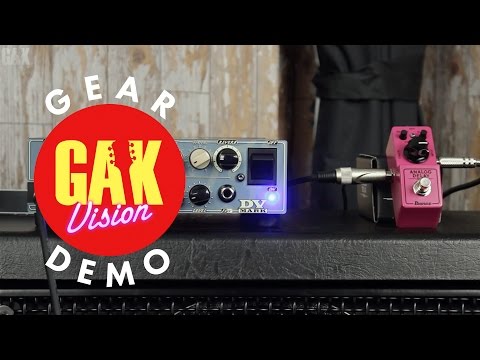