Born in Kuwait on June 8 1970, from very artistic parents, Kamal showed unique talents for drawing and playing music from the early age of 3. He started learning guitar at the age of 9 but took it more seriously when he was 17. Kamal was educated as architect and has went through various musical experiences throughout his young age and college times; of which were Arabic bands, Flamenco, Rock and Blues bands. Late 80's to early 90's, he started discovering more of Jazz sounds and got to know Pat Metheny, Miles Davis, George Benson, John McLaughlin, Al Di Meola, among many others. In 1994 he moved to France, where he experienced another true musical atmosphere for four years, attending festivals and concerts in both France and Switzerland. He met artists from all over Europe and the world. There he created a more obvious interest for jazz, and developed his playing style.

In 1997 he moved back for one year in Lebanon to work as architect; during which he met Ziad Rahbani and started to be a part of his ensemble. There he was convinced his real passion was music and nothing but that, and had to make a serious decision about his career, either to be an architect or a musician, and he chose to explore the musical world. That decision demanded a second trip to France to explore more into the core of the music industry. Kamalís final return to settle in Jordan, led him to establish his own label K&G and to produce his first album ON A JORDAN RIVERíS SIDE, 2003. It was followed by Out Of MY CITY, 2008, LULU,  2009, SONGS FOR SEUNG-EUN, 2011, THE BEST OF KAMAL MUSALLAM, 2012, HOMEMADE IN ROME, 2014, and WORLD PEACE TRIO, 2017. A new collaboration with Billy Cobham, Kai Eckhardt and Gary Husband, among others, is still in production.

Kamal is settled in Dubai since 2002, active locally and internationally as performer and producer. His main touring bands are Kamal Musallam Trio, Lulu Project, and EastMania. Other collaborations perform occasionally as World Peace Trio, with Gilad Atzmon and Dwiki Dharmawan, and Sea Of Strings, with Dominic Miller (longtime STING's right hand), and Jason Carter.

"A fascinating combination of a clear, warm and powerful sound, not only for my electric and fretless guitars, but surprisingly also for my electric oud...I had never heard it singing in such a way!”
Kamal Musallam 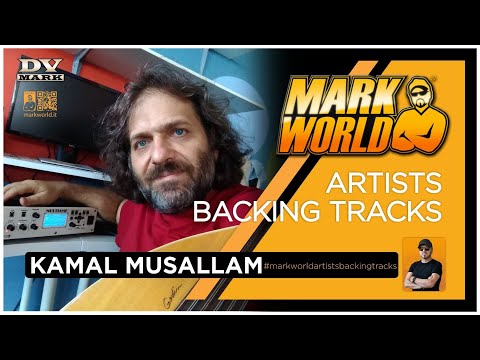