In a career that took flight in 1985 with commercial and critical acclaim, guitar virtuoso Stanley Jordan has consistently displayed a chameleonic musical persona of openness, imagination, versatility and maverick daring.

Be it bold reinventions of classical masterpieces or soulful explorations through pop-rock hits, to blazing straight ahead jazz forays and ultramodern improvisational works—solo or with a group—Jordan can always be counted on to take listeners on breathless journeys into the unexpected.
Key to Jordan’s fast-track acclaim was his mastery of a special technique on the guitar’s fretboard. Instead of conventional strumming and picking, Jordan's innovative "touch technique" is an advanced form of two-handed tapping. While a handful of other players were using similar techniques, Stanley’s fluid, multi-layered textures and sheer virtuosity raised the bar for excellence. But his technique, though impressive, is always a means to a musical end. His music is imbued with a warmth and sensitivity that has captured the imagination of listeners worldwide. A classically trained pianist before playing guitar, Jordan wanted greater freedom in voicing chords on his guitar, so he applied piano principles to do so.
Jordan's touch technique allows the guitarist to play melody and chords simultaneously with an unprecedented level of independence. It also allows Jordan to play simultaneously on two different guitars, or even on guitar and piano. He says that “I think of it as a single instrument, but one with a wide range of tonal colors—that’s why I do it.”
Jordan has received four Grammy nominations. His most recent album "Friends" was nominated for an NAACP Image Award. Los Angeles Times jazz critic Leonard Feather wrote,
“Genius is a word often tossed around in musical circles, but it has been rightfully applied to Stanley Jordan.”
Stanley is committed to music as an artistic, spiritual, and even health-promoting endeavor. He has been immersed for more than a decade in music therapy, towards which he is now working for a master’s degree at Arizona State University. His involvement with music therapy leads him to do outreach in schools, hospitals and other venues wherever he tours.
He is an artist-spokesperson for the American Music Therapy Association, and he has done numerous lectures and demonstrations on the healing applications of music.

"The DV Micro 50 is the coolest new guitar amp on the scene because it's super small and light yet loud! And it really sounds good, with a warm sweet tone. It gives me clarity and presence without the midrange harshness of a typical guitar amp.
And the word is out—I see them turning up in more and more places. I was recently invited to sit in with Billy Cobham and his guitarist Dean Brown was using one! We had a good laugh about that."

"One way I judge a piece of gear is, "Does it make me want to play?" The DV Little 250 M meets that description in a big way. The very first time I tried one I went into "instant rock trance" and started shredding like a maniac.
It was a sneak peek because they're are not on the market yet, but I look forward to getting one and diving deeper."

"The COMPRESSORE by DV Mark has been a game-changer for me on the road. For years I searched for a practical stomp-box compressor with a quality and transparency in league with studio compressors. This is the first unit I've seen that meets these criteria. In my show I go from ultra-sensitive "touch technique" tapping to full-on power-strumming. A compressor can help tame the extreme peaks, but it must be precisely set so it stays out of the way most of the time to let the subtle nuances come through. All the other compressor pedals I tried altered the sound just by being in the circuit, but the COMPRESSORE  truly earns the label 'transparent'."
"I loved the distortion sound of the DV7 DISTORSORE from the moment I first tried it. It's got plenty of grit, yet it has the smoothness that I need for soaring leads.
And the design is really innovative with the attached 7-band graphic EQ. Props to the creative team at DV Mark for this feature, which gives unprecedented control over the shaping of the distortion while leaving the clean sound unchanged."

Stanley Jordan developed a pretty unique technique on guitar and his approach to the instrument made him a one of a kind player. Every original song or cover arrangement becomes an unforgettable journey into the musicality of this amazing artist.

In a career that took flight in 1985 with commercial and critical acclaim, guitar virtuoso Stanley Jordan has consistently displayed a chameleonic musical persona of openness, imagination, versatility and maverick daring. 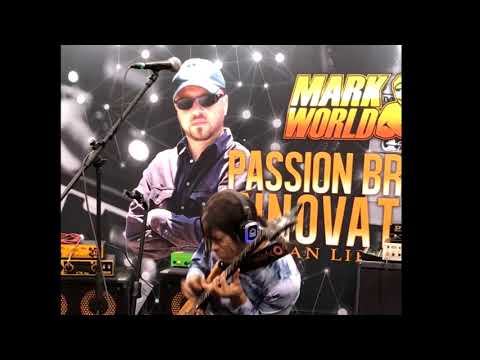